Now that spring has finally sprung in Edmonton, it’s time to get some seeds into the ground. If you still need to pick up some seeds for this season, or if you’re always on the lookout for new things to plant, Alberta has two micro-seederies for you to check out: Harmonic Herbs and A’bunadh Seeds.

Most seeds come from very large suppliers. Gord Steinraths of Harmonic Herbs and Denise O’Reilly of A’bunadh Seeds both got into the seed supply business in order to provide farmers and gardeners with an alternative to the large seed companies. All of the seeds they offer are open-pollinated, meaning that they produce plants that are the same every generation – you can save seeds from one year’s plants and what grows the next year will be the same as last year’s crop. This is different from many of the seeds that are commonly used in large-scale agriculture, which are often hybrids that can’t be saved for the next year (as the next generation of plants won’t always have the same set of traits as the parents).

Gord Steinraths moved back to his family farm near Barrhead in 2001. His seed saving naturally evolved out of always having a garden, but he didn’t realize he could make a business out of it until he attended a Seedy Sunday event eight years ago, where he sold out of almost all the extra seeds he had brought.

“I think there’s room for more small seed companies and more people to get involved in this work and do it well,” Steinraths says. “There’s kind of a renaissance – a slow moving renaissance of seed saving and seed appreciation. For the pioneers, maybe it’s back to the future because that may have just been part of what they had to do. … There used to be a lot of different seed companies and then as the industry consolidated there was less choice and selection and sometimes good varieties would just be dropped and could go extinct because no one was really stewarding them long and working with them.”

Denise O’Reilly tells a similar story. She started A’bunadh (pronounced a-boon-arh) Seeds on the farm near Cherhill where her great-grandfather homesteaded, in response to the lack of availability of locally produced seeds. She has been working on building up a seed saving co-op with those who also want to get into seed saving, as well as building her farm intensively to make the most of the space she has.

“The market is endless for local seed and I think it will be really crucial in the years to come, because we want to be in a position to be resilient when climate change is happening,” O’Reilly says. “So those seeds that are local, that are grown where you grow them all the time, are going to be much more adaptable than the ones that you would bring in [from elsewhere] every year.” 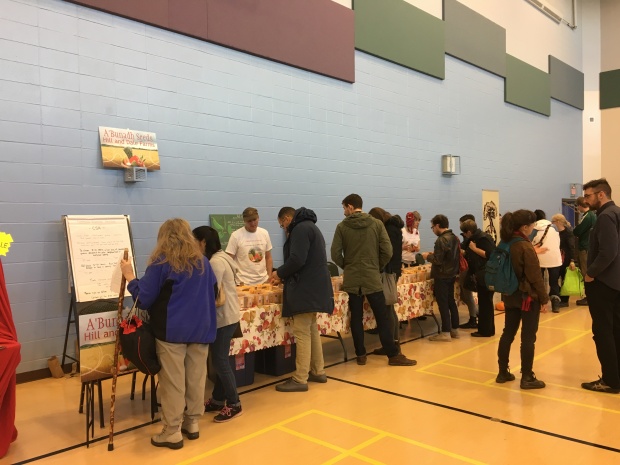 A’bunadh’s booth at this year’s Seedy Sunday in Edmonton.

The great thing about choosing to grow open-pollinated seeds is that everyone can save the seeds they get from those plants, even those of us living in the city. You do need to be aware of the minimum isolation distance required for different species – some plants will readily cross-pollinate with others in the same or similar species. Both Steinraths and O’Reilly suggest lettuce, peas and beans as prime candidates for urban seed savers, because they have very short minimum isolation distances. If you want to save seeds for your own use or to share with friends and family, O’Reilly suggests leaving one plant at the end of each row unharvested, so that you can collect the seeds in the fall.

Even if you save seeds and it turns out that the plants cross-pollinated and took on different traits, that’s OK too! You just might end up with a cool new plant. But this is also why small-scale commercial seed savers like Harmonic Herbs and A’bunadh are so important to our province’s local seed supply: they are preserving the genetic heritage of crops that grow and thrive here in Alberta.

Both Harmonic Herbs and A’bunadh offer a wide variety of vegetable, herb, flower and grain seeds. For more information and to place seed orders, visit their websites:

Freelance writer and astrologer. View all posts by Mel Priestley