This Sunday, March 19, 2017, is your chance to pick up some seeds right from the hands of the people who grew them.

Seedy Saturdays and Sundays are annual seed exchanges that bring together all types of people who are interested in growing their own food, from backyard gardeners to larger-scale farmers. The purpose is to promote seed saving, sharing information and encouraging a community of gardeners, as well as supporting the distribution of open-pollinated, heritage/heirloom and organic seed varieties. (See below for definitions of different types of seeds.)

“We want seeds to be transferred from hands of gardeners to hands of gardeners,” says organizer Wendy Sauve. “It’s about saving seeds and exchanging them. This is one of those few places where that can happen. I don’t think we should take that process for granted. In the States there are some states where that is illegal. We want to make sure that that avenue is available for people.”

The first Seedy Saturday event in Canada was held in Vancouver in 1990. It has since spread across Canada and there are now over 100 events across the country every year. Edmonton’s Seedy Saturday has been organized for many years by a small, dedicated group of volunteers. After no one came forward to host the event in 2006, it was reorganized in 2007 (and moved to Sunday) by a group of gardeners – Pam McKinnon-Coco, Suzanne Cook, Sarah Cashmore and Sauve – who have been gardening together on a plot of land they rent outside the city for over 20 years.

This group continues to organize Seedy Sunday each year, along with the help of Maryann Borch, Anna Vesela, Julia Sepkowski-Cook, Marissa MacIsaac and their team of 40 other volunteers. Over 400 people came to Edmonton’s Seedy Sunday in March 2007; last year’s event in 2016 had over 1000 attendees. Organizer Wendy Sauve says they are expecting at least that many people this year, too.

Over 40 vendors and exhibitors will be at Seedy Sunday this year. Vendors include small seed savers from Vancouver to Saskatchewan, as well as others involved in various aspects of gardening and growing food. The organizing team works with similar groups in Red Deer and Calgary; they always coordinate with Calgary to align their dates back-to-back, ensuring that vendors travelling to Alberta can attend events in both cities.

Seedy Sunday also has speakers and demonstrations throughout the day. There’s always something on seed saving and beginner gardening. This year, there are also talks on beekeeping and growing fruit in Alberta.

“We encourage everybody to come who’s considering gardening, and even if they have a small balcony, if they have a community garden plot or whatever – it’s open to everybody,” Sauve says. “You can start small and with no knowledge and we’ll try to help you.”

“What we’re seeing is that the people who are coming are much more diverse than when we first started,” she continues. “We’re seeing a lot more younger people who are interested and we’re also seeing – judging just by the number of languages that people are speaking when we’re there – we’re seeing more people from different cultural backgrounds coming. It’s really, really wonderful. I think there’s a shift in who’s interested in gardening.”

The Edmonton Food Council will be one of the exhibitors at this year’s Edmonton Seedy Sunday – stop by and say hello, and pick up a pack of seeds! 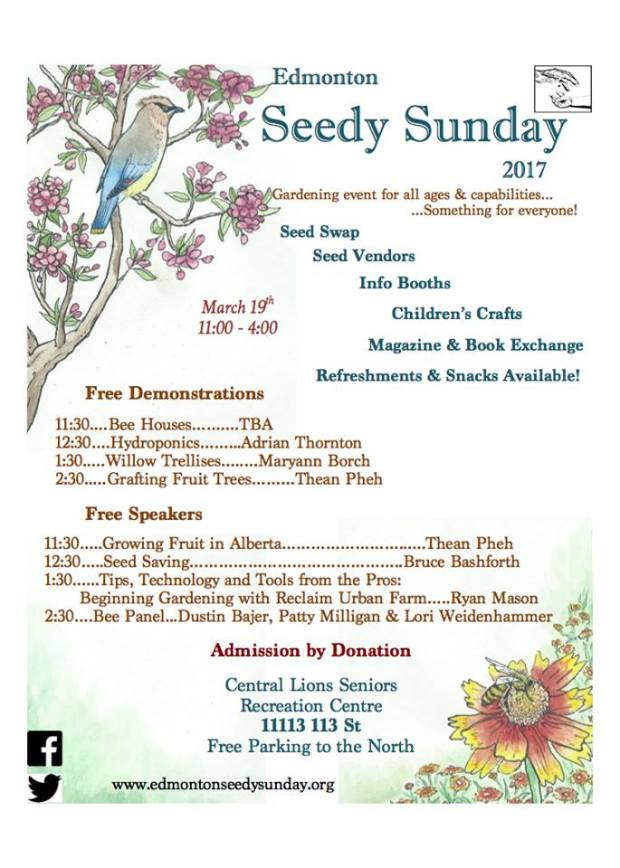 Open-pollinated: an openly breeding plant with relatively uniform traits and appearances, which produces progeny of like qualities – they “breed true” which means their seeds can be saved to produce the same (or very similar) plants in future years.

Heirloom/Heritage: open-pollinated varieties that have existed for a number of decades. There’s no official consensus – some say they need to be at least 50 years old while others say 100. 1945 is often used as the cut-off point as this roughly corresponds to the beginning of widespread use of hybrid seeds by growers and seed companies.

Organic: seed grown using organic principles: a holistic system designed to optimize the productivity and fitness of diverse communities within the agro-ecosystem, including soil organisms, plants, livestock and people.* To be certified organic, the grower must be certified by an accredited body that it meets Canadian Organic Standards; some growers follow organic principles but are not officially certified organic.

Hybrid: seeds that are the result of cross-pollination, which occurs either intentionally with the aid of humans, or naturally. Seeds saved from hybrids are not “true” and progeny will not maintain the characteristics for which they have been bred (cold hardiness, disease resistance, etc). It is possible to stabilize some hybrid seeds into an open-pollinated variety.

One thought on “Come get some seeds at Seedy Sunday”